The widest range of bourbons in the Midlands

The first bourbon distillery was opened in 1783 in Kentucky and the rich bourbon flavour has been evolving ever since. Bourbon is America’s favourite style of whiskey due to the increase in popularity of classic cocktails like the Manhattan in recent years.

Bourbon is a spirit made with at least 51% corn, and aged for a minimum of two years in new oak barrels which have been charred. Bourbon is classically associated with Kentucky, but it doesn’t have to be made there to carry the bourbon name.

The mash bill tells you the composition of the bourbon – the primary grain will always be corn, and the secondary grain is usually rye and barley. You can also find bourbons made with wheat. While the mash bill will be the main influence on flavour, the amount of time a bourbon is aged for, the barrels it is aged in and even the climate it ages in will impact on the taste. 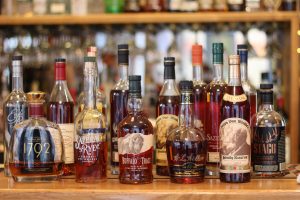 In 1920 Prohibition very nearly killed off bourbon production altogether. The industry was saved thanks to laws legalising medicinal whiskey. In the first year of Prohibition alone doctors prescribed an incredible 64 million pints of whiskey.

Today we enjoy hundreds of finely crafted varieties of bourbons, a small selection can be found here at Manhattan34. Enjoy familiar names like Buffalo Trace, our house bourbon, as well as more unusual varieties like 1792.

Whatever you choose is up to you.